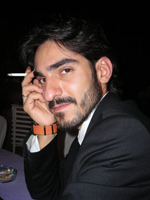 If I wanted to summarize in a few lines my professional role (perhaps in a letter), well, the three words that could describe me would be eclectic, without a shadow of doubt: “Study”, “Testing”, “Training”. From an early age developed a passion I focused my energies on the study of thermo-ballistic machine known to us as a “firearm” as well as every single detail in it, component and/or kinematic… and as for a “domino effect” resulting from a world so fascinating is triggered in me the desire to be able to solve a very simple and at the same time complex equation:

The formula seems pretty basic but in more than twenty years of studies continue to amaze me!

To be honest even the “destiny” wanted to leave his mark… on my first enlistment in the Italian Army , I had the “luck” to be part of the Core

Bomb (BOE at the time , then EOD) of the Company Support mobility of the 4th RGT Guastatori; I remember my first time shooting with the forceps “cut and throttle” on the detonator, his hands were shaking with excitement and the commander who urged me not to “vibrate”.

Weapons , Explosives and ballistics are three areas are inseparable! Which and how many “explosions” are generated in the chamber when firing? It is not a question asked by many, mainly the noise produced by the gas exiting the muzzle is only one, but a detonation (= thousand m/second; suitable external cause) gives life to the explosion (= hundreds of meters second) of the powder launch…

And when firing which forces interact? How to decipher the signs , the footprints of class” and ” singularity” present effects of ammunition (bullets and cartridge cases)? Why?

Give answers to such questions, this is now my profession… at least a branch of it!